We had the opportunity to chat with Shawn Milke of Alesana about their headlining “You Better Watch Your Mouth, Sunshine!” tour, their upcoming record, The Annabel Trilogy, and much more! 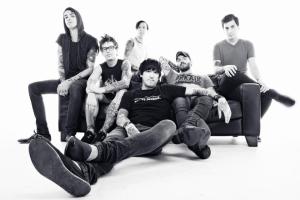 You have just begun your headlining “You Better Watch Your Mouth, Sunshine!” Tour featuring The Color Morale, Lions Lions, Upon This Dawning, and Megosh, how excited are you to be back on the road?
It was very exciting to get back on the road. There is nothing quite like the feeling of being on stage.

Yesterday was the very first stop on the tour in Delaware and you’re playing in New York city tonight, do you think the first show gave you any indication as to what’s to come?
It definitely did. All of the bands played great and really brought the energy and the fans were fantastic.

Could you describe a typical day on tour with Alesana?
We are one of those bands that has a really tight bond with one another. We pretty much spend all day, everyday hanging out together. We love finding new places to eat, or revisiting places we’ve loved in the past. When there is a new record on the horizon we do quite a bit of writing and discussing on the road. We will usually try to find a new show to watch together as well. It gives us something to look forward to doing each night on the drive.

You had previously announced that you will be debuting a new song to your VIP fans during soundcheck, how was the first response from the fans yesterday?
It went very well. It is always quite a lot of fun to unleash new material. I think what makes this cool is that the song will undergo quite a bit of changes from the current state it is in and the fans who saw us during soundcheck will always be able to say they saw the song in a very raw form.

It’s been a while since you guys have released anything new, and I know your fans are extremely excited for the future of Alesana… What can you tell us about the direction you’re headed in with your music and your sound?
As always, the new record will take elements that already exist in our music and marry them to some new ideas and dynamics. This is what is so fun about writing in this band is we get to grow and change with each record while maintaining certain elements that make us Alesana.

You have also announced that the Annabel Trilogy will be concluding this fall, engineered by Neil Engle and produced by yourself. What are you most looking forward to about this record?
Personally, I am looking forward to finishing off the story. It is bittersweet to end Annabel’s story because I have been writing that for several years but it is also exciting to show the conclusion to our fans. Musically, I am ecstatic to travel down new roads and experiment with new approaches and dynamics. It is going to be a lot of fun to make the record in my new studio, as well.

How far into the process are you so far?
We are in the latter writing stages, approaching pre-production which is where the songs really start to breathe life and take shape.

Would you mind giving those who maybe haven’t heard it before a quick brief on the story behind the concept of the trilogy through your previous releases of The Emptiness and A Place Where The Sun Is Silent?
The Emptiness, inspired by a poem by Edgar Allen Poe, is a story that takes place in the 1800’s about an artist and a woman named Annabel. The story begins with the artist awaking to find Annabel has been slaughtered in the bed next to him and continues on a journey of confusion, madness, and discovery. A Place Where The Sun Is Silent is actual the prequel to The Emptiness and is an abstract exploration inside the mind of a madman during his dreams and delusions of grandeur. It was inspired by Dante’s The Inferno. The new record, inspired by the time quintet will pick up where The Emptiness left off and will be filled with some unexpected twists.

How is the writing process different when writing a concept-based record and what are some of the challenges that come along with that?
Musically, the process is really no different. As far as the story writing is concerned I will generally temper the sections based on the music that was written. There is a lot of energy bouncing back and forth between the storyline and the music. It is definitely challenging but the challenge makes it fun and rewarding.

Which artists would you say have inspired you most as a band in terms of lyrics and sound?
I am largely inspired by Between The Buried and Me And Sigur Ros.

Now you guys are headed to Australia in August for your Australian tour, how excited are you to get over there?
Australia is always a good time and the fans over there are amazing and kind.

Now following this tour and with the new record on the horizon, what’s next for you guys?
To keep bringing our music to our wonderful fans. We are also looking to a mini-movie style music video for one of the new songs.

I always like to end off with one of my favorite quotes, “What would you do if you knew you could not fail?”
Pitch in Major League Baseball.

Is there anything else you’d like to say to your fans?
We are blessed to have some of the greatest fans in the world. Thank you for being here with us on our journey!