Singer / Songwriter Jake Rose opens up about his country roots, storytelling in songwriting, and staying true to yourself as an artist. 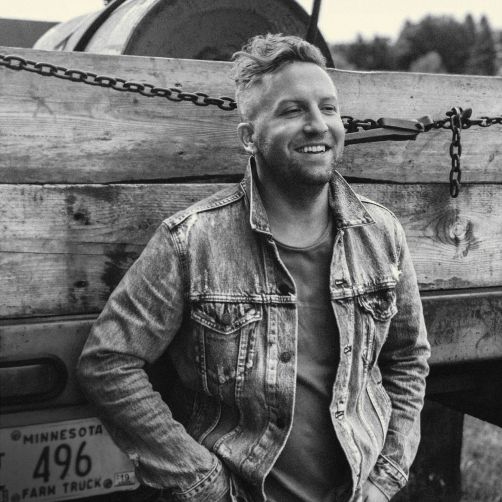 Jake Rose calls us from Nashville where he is preparing to head out on tour with Eli Young Band.

“The songwriting in country music is what I really love, and just truly telling my story,” he says. Jake made waves debuting three country singles in 2018 – Sleeves, Favor, and Family – all very personal songs filled with honest detail about his friends, family, and relationships. “My producer said to me, ‘always says write your story and write the truth,’ that’s kind of the goal of my music: blending the stories of my real life but also making them relatable to everybody.” Jake says that his lyrics are so honest and real that everybody can relate in their own way by inserting their own name and stories. “The songs with the true stories are really the songs that mean the most,” Jake says.

“The audience can sense the authenticity,” he says, referring to the deep truth in his music, “They know that it’s genuine and that it’s coming from a real place.” He says that fans often ask about they lyrics to Sleeves, and question is he really has the tattoos, and Jake just laughs and point to the ink that is right there on his arms. Jake admits that other artists were interested in recording Sleeves, but it was too personal for him to let go of.

“Family means a lot to me, and it is very personal,” Jake says. “It just kind of fell out of me, because I was always saying that my friends are my family.” Jake says that the song was free styling in a way, and he just kept adding friends and stories, and it was it’s all verbatim true. “It just fell right out on the page, it was pretty special.” Jake says that he hopes that song speaks to anyone who either doesn’t have a close family or is at the pivotal age in their mid-20’s where your friends really do become your family. “You’re all growing up together and you move out, and you get to that point where you’re trying to figure what’s next, and no one really knows. You’re all going through it together, and you have to take care of each other,” Jake says.

“Favor is very personal as well,” he says, “that’s a completely true story – It might sound fictitious but it’s not. It was pretty brutal for me,” Jake admits.  Jake says that it was a truly cathartic experience to write that song and get it out. Jake remembers when he first played it for all of his friends, and they all cheered, knowing exactly what it was about. “There is nothing sweeter than knowing that the person heard it was about the song. It’s the ultimate payback,” he says with a laugh.

Jake’s love for country music and songwriting spans back to his childhood, where he was surrounded by southern rock. “I was 4 years old and I started playing drums,” Jake says, recalling the Mickey Mouse kit of 5 gallon buckets that his dad set up for him. His father and uncle played together in a southern rock band for over 40 years, and he credits being surround by that music as his initial inspiration. “I remember at the age of 4, going to shows and seeing the lights, and seeing the guitars, and the smell of a venue, and everything was real rock n’ roll. I was drawn to it,” Jake says, “I was drawn to anything my dad did, honestly.” When Jake wasn’t onstage with his dad, he remembers riding in the tractor all day, every day. “I loved riding in the tractor,” he says, “When we weren’t doing farm stuff, it was guitars. I always listened to country music in the tractors.”

Dad and I on stage, I must have been about 4. Cowboy boots, blue jeans, just like my pops. Dad’s in the cowboy hat, probably playing some Freebird on that Firebird. I have a lot of hero’s in my life but no one compared to my pops. I always have wanted to be just like him and do everything he did, drive tractors and play guitars. He got to come see me last night play a sold out show, and I think that’s probably the best Father’s Day gift I could give him. Love you pops! Happy Father’s Day to all the dads out there!!

Growing up 20 miles outside of town, Jake remembers only receiving one country radio station that he would have on continuously. “I just remember riding in my dad’s truck hearing Sweet Home Alabama, and I got these goosebumps,” Jake says, remembering the moment he knew that music was what he was meant to do.  “I just had this feeling that, I think I love music more than the average person. I get high off of hearing new songs, and I really just love music… I just wanted to keep listening, and keep playing.”

Jake remembers one moment specifically that true inspired him. His friend Lizzy Hale of Halestorm invited him to her show at Nissan stadium where she was playing with Eric Church. “We were backstage, and I was looking at like 50 tour buses in the parking lot, and there were fireworks, and 65,000 people, and Miranda Lambert walks up and says, ‘Hey y’all what’re y’all doing?’ and then Eric Church’s band comes out with mohawks and tattoos and drops heavy rock cords… and I just thought: this is where I belong. Right here.” Jake say that that was a moment that blended all of his favorite things into one, and where he realized it was exactly what he wanted to do. “It was epic and inspiring.” 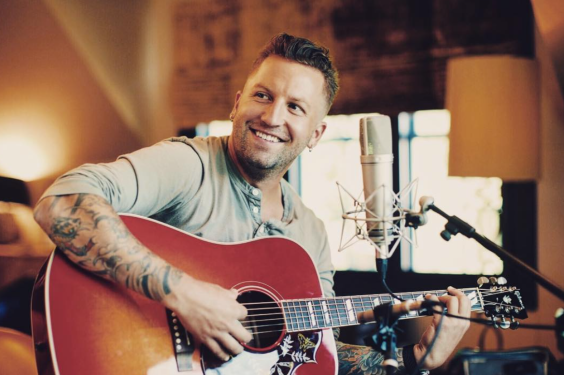 Jake’s roots are country and southern rock through and through, and while he’s produced and written for rock bands, his heart is in country.  “Our generation comes from a lot of different backgrounds and we’re exposed to so many different kinds of music,” he says, adding that while he grew up on Lynyrd Skynyrd, he also loved listening to Metallica – it was everything from Taylor Swift, to Eminem. “I’ve always loved rock n’ roll, and I’ve always loved country. I think that’s what separates my live shows – there is an influence of high-rock energy.”

“I like my shows to feel like a house party,” Jake says, adding that when he was growing up, at houses parties his friends would always ask him to play a song, and he would get up and sing Tom Petty for the room – and that’s what he hopes his live shows feel like. “I love making people feel good on a Friday night,” Jake says. “I love when you’re at a show, just having fun, letting go, and singing along,” he says. He hopes that people at his shows will truly feel like they know him, and that he’s telling them his story. “I want it to feel like: Hey I know Jake. He’s got his sleeves, his friends are like his family’ and make it feel like we’re all friends having a good time.”

Jake is currently out on tour with Eli Young Band, and with his debut album on the horizon, Jake is looking forward to being on the road as much as possible in 2019. 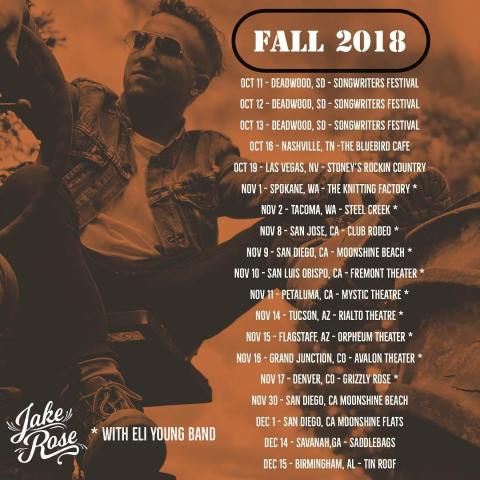