With an ever-present divide in the music industry between new artists and those that have “made it,” one artist is at the forefront of breaking down barriers, and bridging the gap between a young artist with a dream and the industry opportunities available to them.

Kellin Quinn has spent the last ten years on the road and in the studio as the vocalist for the internationally recognized rock band Sleeping With Sirens. In addition to the five full-length records under his belt with the band, and one more dropping next month, Kellin has consistently encouraged collaboration over competition in the industry, having leant his vocals to over 20 tracks by different artists.

But Kellin’s desire to collaborate stems far beyond being featured on a song. Drawing from his own expansive experiences, he developed a passion for helping new artists navigate the music industry. With a dream of both encouraging and inspiring a new wave of musicians, Kellin launched Dreamer Development Group: aiming to provide artists with the tools and opportunities they need to develop their music and chase their dreams.

“I’ve kind of always had a knack for, I guess, seeing an artist’s potential before either they could, or somebody else has had the opportunity to do that…” Kellin tells heirwaves, “I just wanted to help navigate some of these younger people into maybe not making some of those mistakes that I did, and helping them understand how things work,” he says.

He compares viewing record labels as a young artist to being in the NBA and dreaming of getting drafted to your favorite team – but warns that those labels often have their own initiatives. “Sometimes those labels that you see your favorite artists being a part of don’t necessarily work with what you’re doing. I think that it’s important to see the bigger picture, and that’s really why I wanted to start doing this,” he says.

Acknowledging just how daunting it can be when trying to figure it out on your own, his ultimate goal is to bring the excitement back into the art by letting artists know that he cares and is on their side. “I want to be able to help them handle some of the harder parts, where they can just focus on being creative and dream,” Kellin says.

And those more difficult aspects include Kellin essentially jumping in to whichever role is necessary for each musician, serving as everything from a producer, to a manager, or just an overall mentor to the three artists on the Dreamer Development Group roster.

Dreamer’s first artist, Manic., had originally hoped to work for Sleeping With Sirens as a tech – feeling as if he just wasn’t making it in music. “I was blown away by his work,” says Kellin, who stepped up to guide him in the right production direction. He also took on that producer role with his newest artist, Patient Sixty-Seven. “Those guys are just really, really sweet kids that I think have a lot of potential to make some really good music,” he says.

Roseburg were striving to take their career to the next level when they first connected with Kellin. “They felt like they just hit a road block and didn’t know really where to go,” he says. In addition to collaborating with the band on their July single, ‘RIP,‘ Kellin stepped into a manager role, and set finding a label as a priority for the next phase.

Through it all, he is simply used where he is useful, and that he hopes to inspire his artists to feel confident about the work they are doing. “I can’t wait to go see all these artists in concert and watch them perform and do what they love…” he says, with an evident beam in his voice, “I think that’s going to be the most rewarding part of all of this.”

That sincere passion for helping others rise parallels the overall vision of Dreamer.  Kellin’s appreciation for the most altruistic form of collaboration is something so rare to stumble upon in a historically competitive industry. “A lot of artists feel like they have to stand out… they get threatened by other artists that come onto the scene,” he explains, “It’s unfortunate because I think that we really can help each other, and I think that the more music the better.” 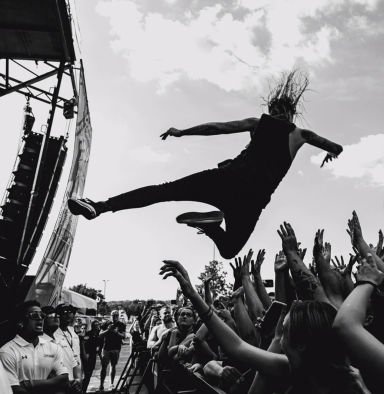 With a goal of making the world a better place through sharing music and encouraging the next generation of artists, he recognizes that music should be a collective and collaborative goal. “I get that it can be threatening,” he says, “but I think if you embrace other artists and we can work together, then we can just create a bigger scene and a bigger world for fans to come be a part of.”

He is openly embracing that bigger scene within the rapidly changing industry, and recognizes that his artists are at the forefront of the evolution. “I’m learning a lot about the music industry through them,” says Kellin, “Being open and understanding of where music is going is important.” He also credits his three kids with keeping him fully immersed in the latest streaming trends.

Along with helping his current artists, Dreamer Development Group allows him to explore the options that his future within the industry holds. “Let’s be honest, I don’t want to tour out of my suitcase forever,” he admits, “My daughter’s going to grow up, and I want to be around for things that she’s doing, so this is the natural step for me in life.”

With building his current artists to where they’re supposed to be his number one priority  – he says that what comes next is still up in the air. “I appreciate all the support from the fans of Sleeping With Sirens for helping me grow this too. I think they’re jut as much a part of it as I am,” Kellin says, “I really appreciate the support in helping me follow my dream to help these artists follow theirs.”

You can help support Dreamer Development Group with a personalized Cameo video from Kellin Quinn.