On Thursday, October 17th – Nashville’s The Listening Room Café brought together some of music city’s most celebrated songwriters, plus a few very special guests for an extraordinary evening of songs, stories, and surprises. Writers Round Up A Cure featured Nashville’s own JT Harding, Emily Weisband, and Jimmy Robbins, with proceeds benefitting the American Cancer Society.

Country Songwriter JT Harding opened up the show with his enthusiastic presence bringing an energetic boost to the crowd as he performed Blake Shelton’s “Sangria,” and Keith Urban’s “Somewhere in My Car.” But it was Harding’s song “Smile,” originally performed by Uncle Kracker, that lit up the room as a slideshow of nostalgic songwriter photos began to shine from the projector.

Next to grace the stage was Country, Pop and Christian Contemporary Songwriter, Emily Weisband. Set to release her debut artist project “Identity Crisis” the very next day, she laughed as explained that she could never have imagined herself stepping out from beyond songwriting as an artist. With her co-writing credits featuring the Top 10 worldwide hit “Boy with Luv” performed by BTS with Halsey, and Grammy Award winning Christian track “Thy Will” by Hillary Scott, Weisband’s portfolio includes a wide range of pop and country hits – including Camila Cabello’s chart topping single “Consequences,” which she delivered a stunningly emotional performance of. 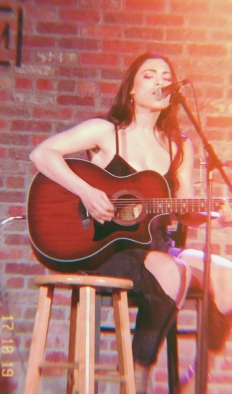 Grammy and CMA nominated songwriter and producer, and founder of JRM Publishing, Jimmy Robbins followed on stage with his song “We Were” – recorded by Keith Urban. Diving into the darker side of a love story, Robbins went on to share the story behind Raelynn’s “Love Triangle,” capturing a child’s perspective on the tense effects of a broken home.

Robbins then stunned the crowd by introducing surprise guest, Kelsea Ballerini. Ballerini mesmerized the audience with the debut single from her upcoming third record, “Homecoming Queen?” performing the song live for only the fifth time ever. Co-written with Jimmy Robbins and Nicolle Galyon, “Homecoming Queen?” sheds a vulnerable, yet powerful light on the beautiful power of authenticity and the importance of staying true to yourself. 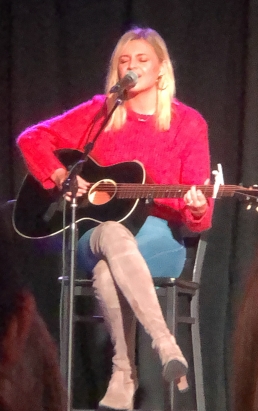 The surprises did not end there, performing his brand new single “Kinfolks,” Sam Hunt joined the writers on stage, following it up with his throwback hit and evident audience favorite, “Take Your Time.”

As Weisband went on to explain the beautiful romance she witnessed between her mom and dad while growing up, members of the audience shouted out a request – which she then complied with – for her captivating original song “Naked,” – earning a spirited applause from the crowd.

As the round began to come to a close, Weisband anxiously waited for her close friend to join them as the final surprise guest. Making an exciting last minute appearance, singer/songwriter JoJo graced the audience with her latest single, “Joanna,” and earned a rousing cheer as she sang her nostalgia-inducing breakout hit, “Too Little Too Late.”

The Listening Room Café was truly full of exciting surprises and incredible music as the audience was filled with a wild range of emotions stemming form songs that both tore at delicate heartstrings and had the lively audience dancing and singing along on an unforgettable evening in Nashville – all for a phenomenal cause.