After studying business in college, Kentucky raised Jordan Minton decided to follow his heart down a different path and pursue his dream of singing and songwriting in Nashville – eventually becomming the first songwriter signed to Keith Urban, Ross Copperman, and Joe Fisher’s BOOM Music.

After spending several years developing his craft in music – Minton’s aspiration to become a songwriter continued to evolve. From playing music at his high school chapel, to writing songs and playing in coffee shops throughout college, Minton eventually made his way to music city to pursue a career in the industry.

Minton has penned several widespread country music favorites – From Keith Urban’s “Steal My Thunder” and “Same Heart” to Dan and Shay’s “What Keeps You Up at Night,” along with Abby Anderson’s “Good Lord” and Mitchell Tenpenny’s “Telling All My Secrets.” 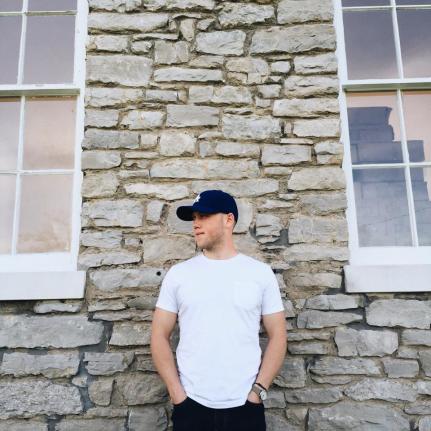 When it comes to sitting down for a write, Minton describes the importance of routine, which allows him to tap into his creativity. “My wife and I were just gone for two weeks on vacation and then I was home for two days and left again for a songwriting festival,” he tells heirwaves, “When I came back Monday and Tuesday, it was super bizarre for me to get into a headspace for writing because I had been out of it for so long and wasn’t in my routine. I realized how much that plays into me having a creative space in my head and being in my routine.”

In establishing that routine, he has come to realize how valuable creative spaces are. “I’ve met certain people like my friend Jimmy Robbins, or Josh Kerr and Jordan Reynolds, that I feel really comfortable in their studios. When I go there, there is already a creativity or an inspiration that I feel just from being there because I’ve written so many songs that I love there,” he shares, noting that some of those studios are environments he loves to write in.

While writing consistently in studios helps Minton stay in his routine, he does share how much he enjoys both bus writing sessions with artists and songwriting retreats.“Writing on the bus, I love how much you can get done,” he explains, “It’s the only reason you’re out there. That’s usually when you get a ton of the artist’s attention compared to writing in town, when you might only get a day to write with the artist.”

Dream come true tonight. On stage with @keithurban and @rosscopperman. Keith is playing my guitar. I'm staring. Life is wild. God is good. So thankful to be a part of @boommusicnash with @loganlturner and @calirodi. Y'all killed it tonight!

Minton says that it’s humbling to be surrounded by the likes of Reynolds and Kerr, along with friends  Devin Dawson, Mitchell Tenpenny and more in his circle. “So many people in Nashville that do what I do are so good at their job and everyone that you walk into a room with has that ability to write a great song and in one aspect that can be intimidating. But for the most part, it’s really encouraging,” Minton says.

He adds that walking into co-writes, if there are days where he isn’t feeling 100%, he can walk into the room and know that collectively, the group can come up with an idea and put something together. “I really just feel thankful to be in this circle of writers that I get to be in. The people that I am surrounded by are people that I am a fan of. They’re people that I love getting to write with and I just love the songs they write, so it’s nice being associated with people that I would be fans of regardless of if I got to write with them or not,” he adds.

Last year, Minton was involved in writing for Dan and Shay’s self-titled album, Dan + Shay – co-writing the track “What Keeps You Up at Night.” “It’s a really cool thing to have a song that you really love get picked up by somebody that you really love listening to. That’s definitely rare, but it’s one of my favorite songs,” he shares. Minton recalls that at the time, he, Reynolds, and their friend Chase Foster hadn’t been writing for radio and didn’t have a specific artist in mind for the song, it just organically materialized and came to life.

When thinking about the long-term impact he wants to have on the songwriting and music industry, Minton shares that he wants to write impactful, meaningful songs. “Something I value a lot in songs is the ability to have a little more meat in the song and a little more depth to a song,” he says, “I would hope that later on in my career when people would recognize a song that I am a part of, they would recognize that that song has an extra layer of depth or there’s just a little more meaning.”

“As a lyrical-driven songwriter, it’s just being able to bring a little bit of depth to every song that I am part of, whether it’s just an uptempo fun song or whether it’s something a little more somber and impactful,” Minton concludes.