Louisiana-born singer/songwriter Lacy Cavalier moved to Nashville at only 16 to pursue her love of music. From launching her entertainment career on Barney and Friends as a little girl, to more recently opening up for Chase Rice on his U.S tour, Lacy has had a wide range of experiences within the music industry that have helped her grow as a songwriter while simultaneously growing up as a young woman.

“I’ve definitely learned that I am incapable of having artistic growth without personal growth,” Lacy, now 22, shares with heirwaves in Nashville, reflecting on how she has grown since she first began writing. 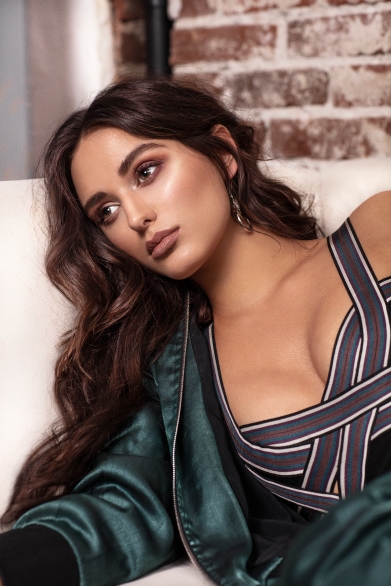 “For many years, I felt the pressure of what radio wanted, what labels wanted, or what publishers wanted because I wanted to succeed and I wanted to give that to them,” she says.

Lacy concludes that she had to overcome that sense of insecurity and return to why she wanted to pursue music in the first place, noting “I realized that’s not at all what art is about or what music is meant to be,” she says, and the new-found confidence is evident in her voice.

She also has been more intentional, not just with her lyrics, but with making time to write songs on her own. “I revisited writing on my own, which I didn’t do a lot in the beginning years after moving to Nashville,” Lacy shares, adding that her confidence in writing her own songs helps her to feel secure walking into a writing room with other co-writers.

Lacy found her perfect balance of vulnerability with the release of her single, “Cheating on You” in October 2018. The song is inspired by the sense of loss after a relationship, where you still feel loyal to someone you don’t belong to anymore. While Lacy’s early releases may have showcased her strong vocals, “Cheating On You” elevated Lacy’s ability to also be honest and raw as a songwriter.

At first, Lacy published the video for “Cheating on You” to her YouTube channel in hopes her ex-boyfriend would see the video. “I wanted it to be something I would email or text him, so that was kind of the point. I knew that when he saw me it was a different story rather than just reading a text message,” Lacy says, but it is this authenticity that really resonated with her audience.

Ultimately, the song served as much more than a message to an ex with over 3 million views on YouTube, and over 2 million streams on Spotify. “As a songwriter, it was cool to realize that my details are important and people really tend to connect with them. That’s all I’ve ever really wanted, so it made me excited to keep writing because I wasn’t chasing a trend,” Lacy shares.

let me pregame to @morganwallen n this is just what happens

The embrace of “Cheating On You” gave Lacy the courage to release the singles leading up to her debut EP k, i’m done on July 12th. “All I have to give is my honest story, and that’s what those songs were. Even if sonically they vary, it is my transparent, most vulnerable view of that relationship,” she explains, making it clear that she’s is not holding back anymore.

“The EP is really…the rest of the story,” she adds, noting that the EP will cover the same topic, which was important to her. “It’s named k, i’m done because I’m over talking about my ex-boyfriend in my music,” she shares, “but it has definitely been a cool sense of closure that I never thought I would get from that situation.”

While k, i’m done, may mark the end of Lacy discussing a past relationship in her music, it’s clear to see that it’s actually only the beginning of what is to come for her as an artist and a songwriter. And that’s the tea.

“k, i’m done” is available for streaming on all platforms now.