“We’ve been best buds forever,” Nick says when calling heirwaves during a band breakfast meeting in Cleveland. He adds that while he started writing songs early on in his high school career, the four friends began to write together closer to graduation. 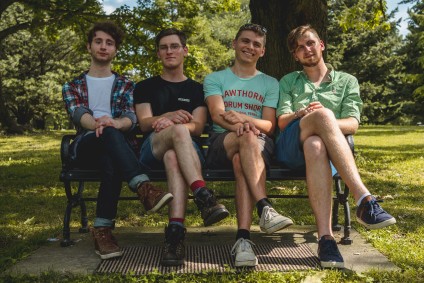 “I was in a percussion group in high school with Nick called The Trashtalkers,” Luke says. Towards the end of high school, Nick asked him and Geoff to help with some music he hoped to turn into a full band production. “We just kept writing more and more until we had an album’s worth of music ready,” he adds.

The band’s latest single “Strike A Nerve” was a track that they had reworked from their 2017 debut album Short Stories, Vol II, with the help of the band’s college resources. “I’m currently in school for recording arts and music production,” Jared says, revealing that he had an opportunity to use a professional studio while working on his final portfolio.

Around the same time, Geoff was working on a music video project for his film degree. “We decided, since we were already using the song for one school project, why not combine the two?” he says. That combination lead to the re-tracking of “Strike A Nerve” as well as a new music video that had re-defined the band’s sound entirely.

The song manages to capture the bands widespread range of musical background and taste, layering a dynamic blend of sounds. Initially being released as a rock song, the re-tracked version  fell under the folk genre. “Where we fall, genre-wise, has always been a prevalent topic among us,” Nick states.

“Folk is the most encompassing one because most of our stuff is written on acoustic guitar,” Luke says, adding that each song would really have a different label. “We worry about genre, but we also kind of disregard it,” Jared says, “I don’t think we’ve settled where we are… and we’re kind of cool with that.”

The immensely dynamic music environment in Cleveland has had an important impact on the unique blend of sounds within their sound, but has also drastically impacted the band’s live set. Often playing shows with bands of different genres, they are constantly adapting their setlist. “There’s an unspoken understanding with a lot of Cleveland bands where they attempt to stick to the same vibe,” Jared says, “so that the entire show as a whole feels like one cohesive thing to the crowd.”

That ease to adapt based on the crowd played a strong role when they recently opened for Gnash & Anna Clendening during Cleveland and Columbus shows. “Those shows were a blast!” Luke exclaims, “We usually play to an audience of friends and family. The Gnash shows were our first shows to an audience of completely new people.”

Those large-scale opening spots evidently struck a nerve with the band, who are ready for more. Heading back into the studio with plans to re-track two more singles for release this fall, Suitcase Runaway aims to release their sophomore album early 2020.

“Strike A Nerve” is available for streaming and download on all platforms.