Nashville based singer/songwriter Maria Hassel’s debut single takes a deep dive into the harsh reality of living with an anxiety disorder. Simply titled “Anxiety,” the track is a raw and honest narrative of the feelings and fears that wholly consume those struggling with the disorder.

“This song is just simply my story,” Maria tells heirwaves, “I didn’t overthink it or second guess it when I was writing it because I was just writing what I knew – which was how anxiety felt.” She explains that the song came from a deeply real place for her, having been diagnosed with severe generalized anxiety and panic disorder when she was 18. “It rocked who I was, changed a lot of my plans and took awhile to accept and understand,” she says.

After living with anxiety for 4 years, it was still difficult for her to find the words to write about it – until one night, the lyric “It’s nothing and it’s every little thing, Anxiety.” popped into her head. Produced with her friend Kevin Monahan, she reveals that she intended the production to sound exactly like anxiety and panic sounds. “This song is my favorite song I’ve ever written,” she says, “and I don’t know that I will ever write something as special.”

The instrumental backing begins with a simple melodic piano tone and slow percussion that near mimics that of a heartbeat – building up to a heavier chorus that is laced with a bold blend of dynamic vibrations, capturing the intense panic and commanding force of anxiety. “I grew up on country and learned how to write and tell stories through country music. But, I love pop music,” she explains, crediting Lorde’s Melodrama album with inspiring her to shift into the pop genre. “I think the blend of country storytelling mixed with pop melodies and moody indie pop production make my music unique,” she says.

The lyrics of the song represent truly vulnerable experiences for Maria, who admits that while she has always loved uncomfortably honest songs, when it came to “Anxiety,” it was harder to express those feelings. “I knew that someday I would write about it, but wanted to do it really well and express it in the most raw, real way,” she says. 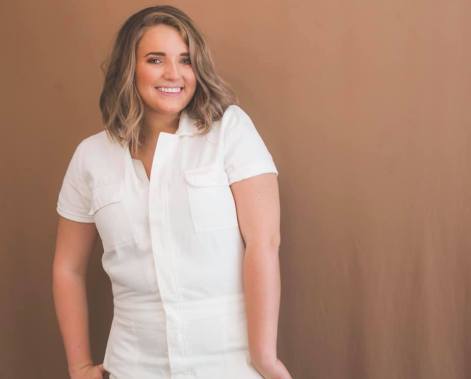 “Releasing it definitely took some bravery,” she admits, “But, you get tough when you live with anxiety and I knew that I had to share my truth. I’m so passionate about mental health and if “Anxiety” can help just one person feel less alone or encourage someone to get help- then this song was worth releasing.”

Through sharing her story and her experiences, Maria has shined a light on a subject that is extremely difficult to talk about. In allowing others to feel understood, she has also opened the door to have the important conversations surrounding the disorder, and to acknowledge it instead of hiding it. But even beyond just inspiring through her words, Maria is also turning her words into actions. 10% of all proceeds from “Anxiety” will be donated to Lady Gaga’s The Born This Way Foundation, that Maria credits with helping to educate her about anxiety and mental illness. “They are working everyday to improve mental health education and fight for equality,” she explains, “I strongly believe in implementing mental health education into every high school across the country. It’s so important.”

“We have a platform to shine light on these causes and make the world a little better of a place,” she continues, noting that the opportunities to get involved and contribute are out there – whether we do that by donating or sharing on social media. “I really think if we all got behind what a cause are passionate about, we could change the world,” Maria says.

With her debut single already making waves, it is truly just the beginning for Maria – who has two songs on the soundtrack of the upcoming Chad Michael Murray film Max Winslow and the House of Secrets. “It’s so surreal to know that my music will be in A MOVIE. It’s a pinch me kind of thing,” she exclaims. Noting that her new music is set to be released sooner rather than later – Maria’s authentic storytelling and genre-bending style are truly captivating as she inspires listeners to speak up and let their true colors shine. “I just write my truth and release music that I’m proud of,” she says, “and that’s what I’m going to keep doing.”

“Anxiety is available for streaming and download on all platforms now.